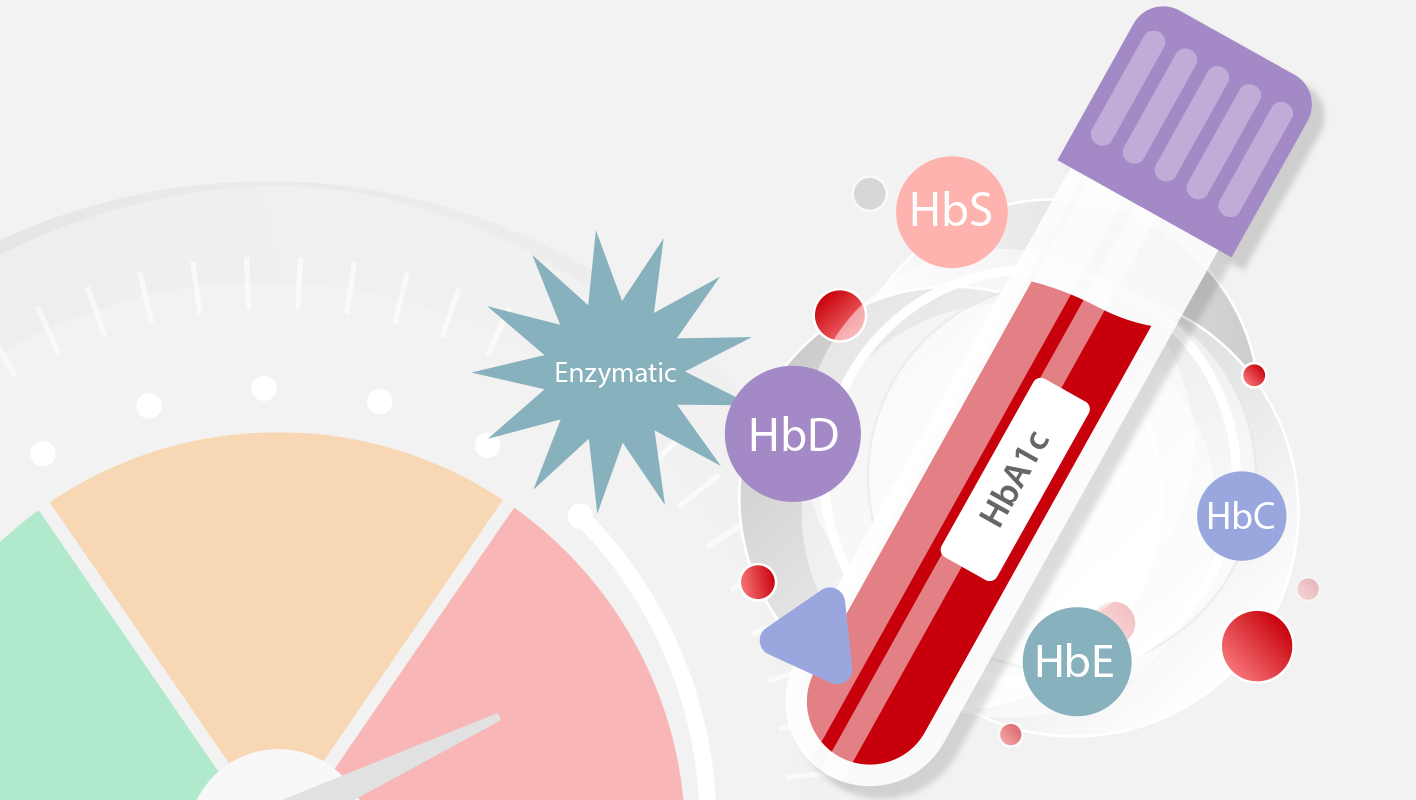 HbA1c, first separated in 1958, is fast becoming the core test for diabetes mellitus screening, diagnosis and therapeutic monitoring. Recognized as the standard tool for clinical practice, it has many advantages, such as being non-fasting, easy to use, and able to reflect the glycemic control over a period of 3-4 months.

The IFCC working group has defined HbA1c as Hb which has been irreversibly glycated at one or both N-terminal valines of the beta-chains.[1] The commonly seen hemoglobin variants, such as HbS, HbC, HbE and HbD, have single amino acid substitutions in the beta-chains. Thereafter, each of these hemoglobin variants, depending on the method used, may cause an inaccurate HbA1c result because of analytic interference. Alternatively, an HbA1c value that is clinically misleading because of biologic variables affecting the interpretation of the result may be caused. 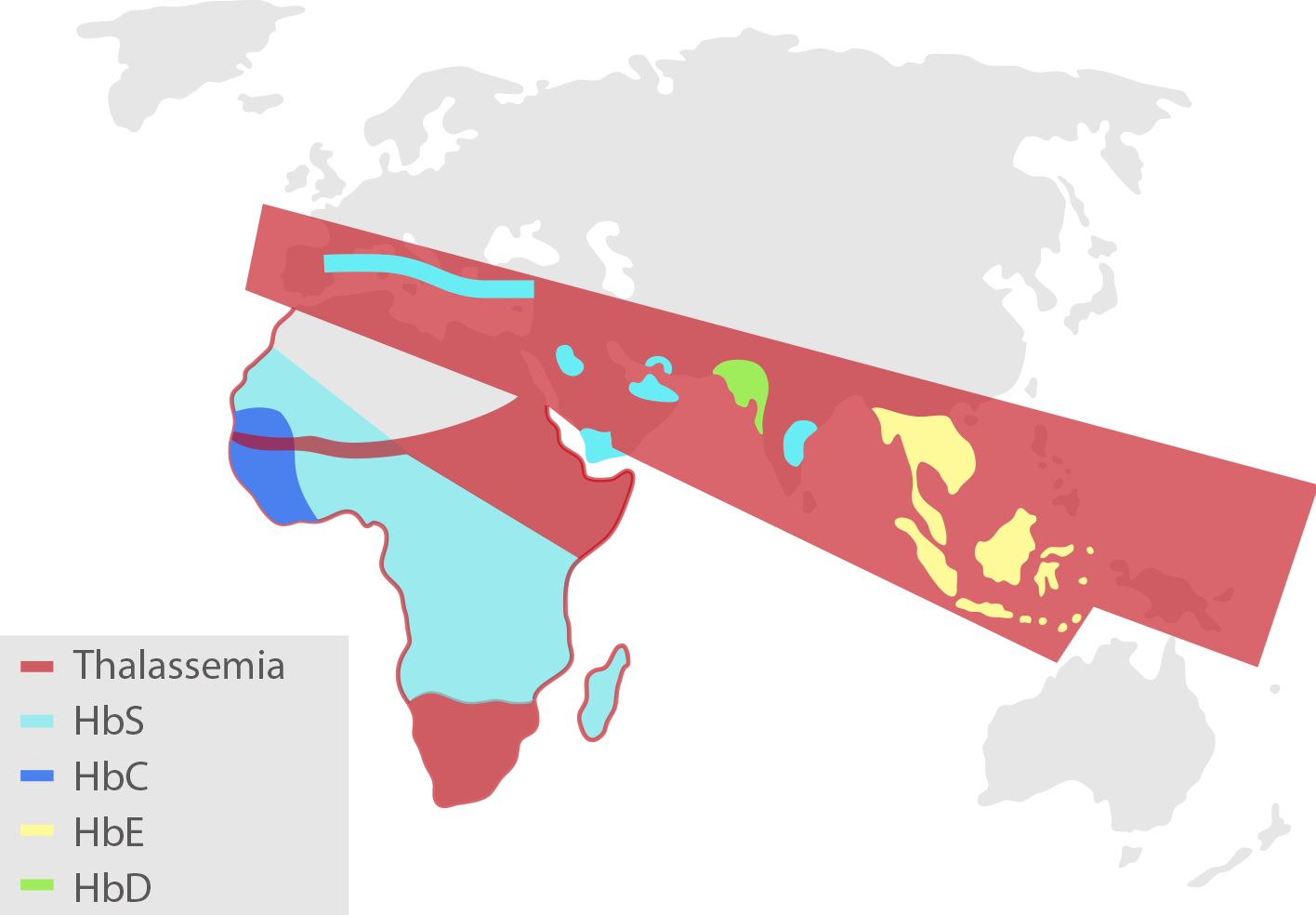 Amongst all testing methods for HbA1c, Mindray Biochemistry has chosen an enzymatic method because of certain methodological advantages. One such advantage is the anti-interference capacity against hemoglobin variants.

For the enzymatic method, whole blood samples are lysed and subjected to extensive proteolytic digestion. This process releases amino acids, specifically the glycated N-terminal amino acids from the hemoglobin beta-chains. The signal produced by the glycated N-terminal amino acids in a subsequent chromogenic reaction is used to calculate HbA1c. This method is unaffected analytically by the presence of Hb variants.[4] 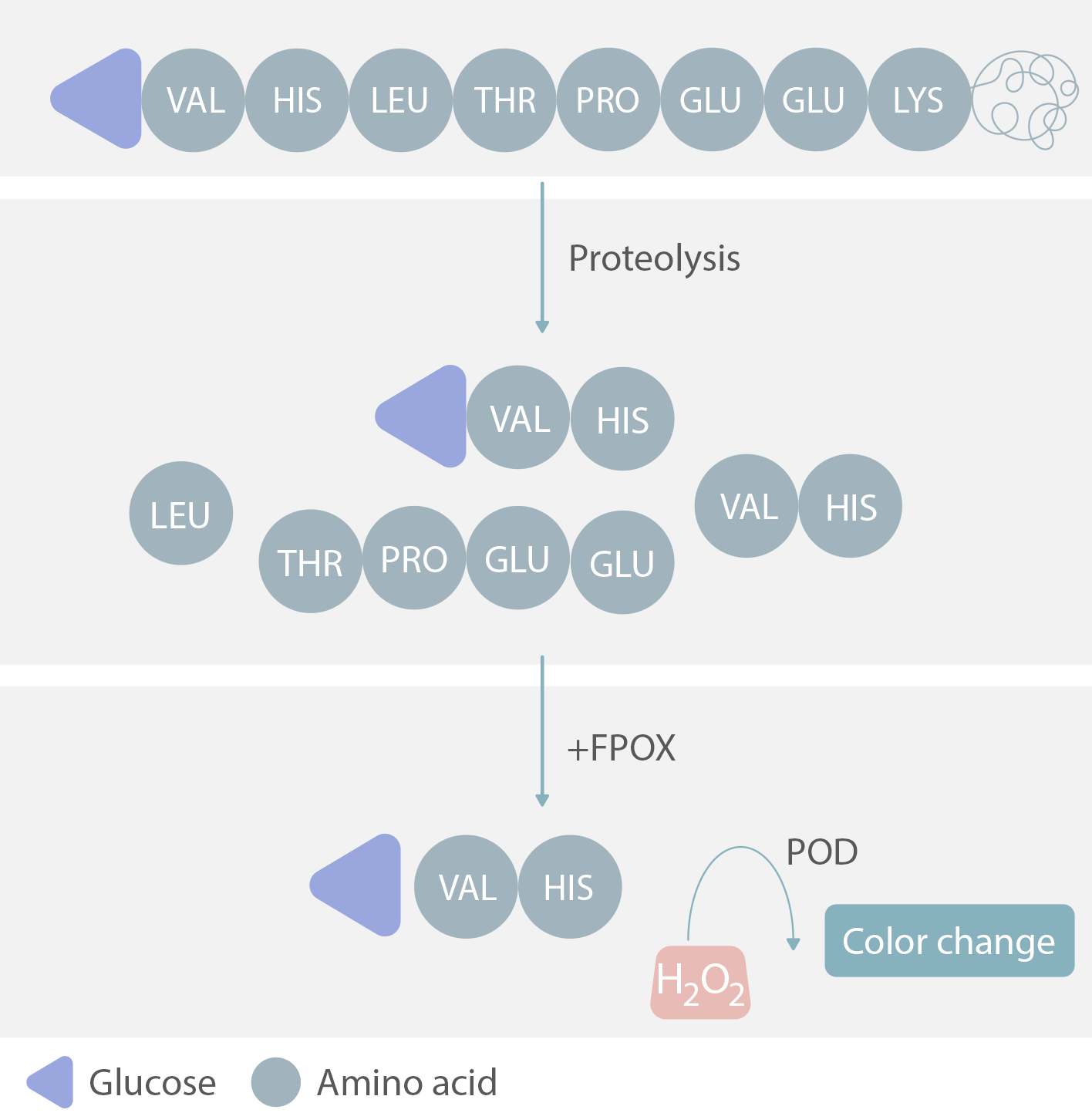 To reveal the anti-interference capacity, we have devised an internal study. Samples were collected from the Queen Beatrix Medical Center in The Netherlands, which houses the European Reference Laboratory for Glycohemoglobin, and the Primary Reference Laboratories for HbA1c standardization. The values of HbA1c were assigned by an IFCC calibrated affinity chromatography instrument. The percentage of HbS, HbC, HbE, and HbD were assigned by capillary electrophoresis and ion-exchanged HPLC. HbA1c (NGSP%) was measured on the BS-800M chemistry analyzer. No significant interference bias (i.e., greater than ± 5.0%) was observed for HbS, HbC, HbE and HbD. The data tested by Mindray and the target value assigned by European Primary Reference Laboratories were analyzed and listed in the following table and charts: 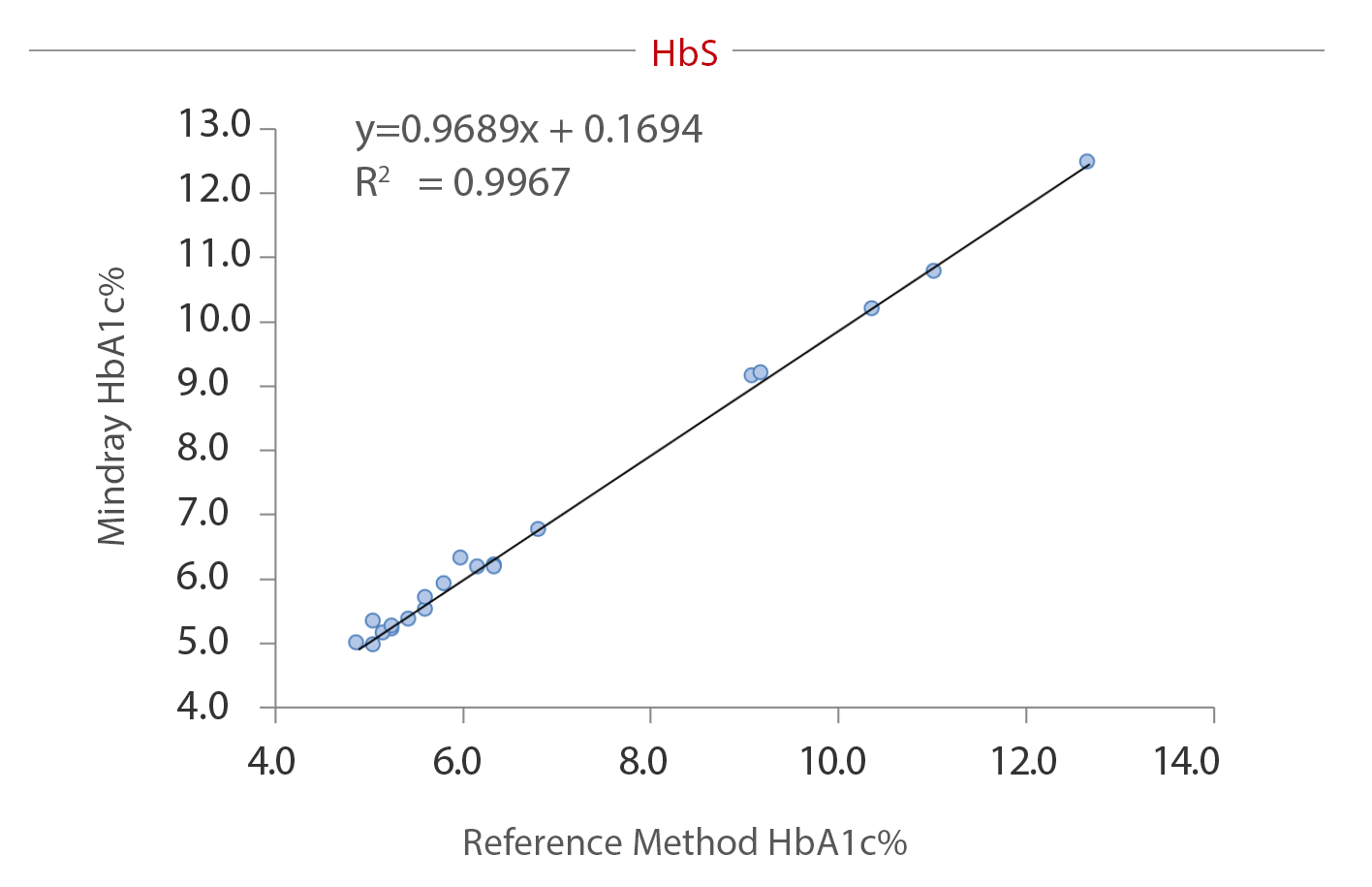 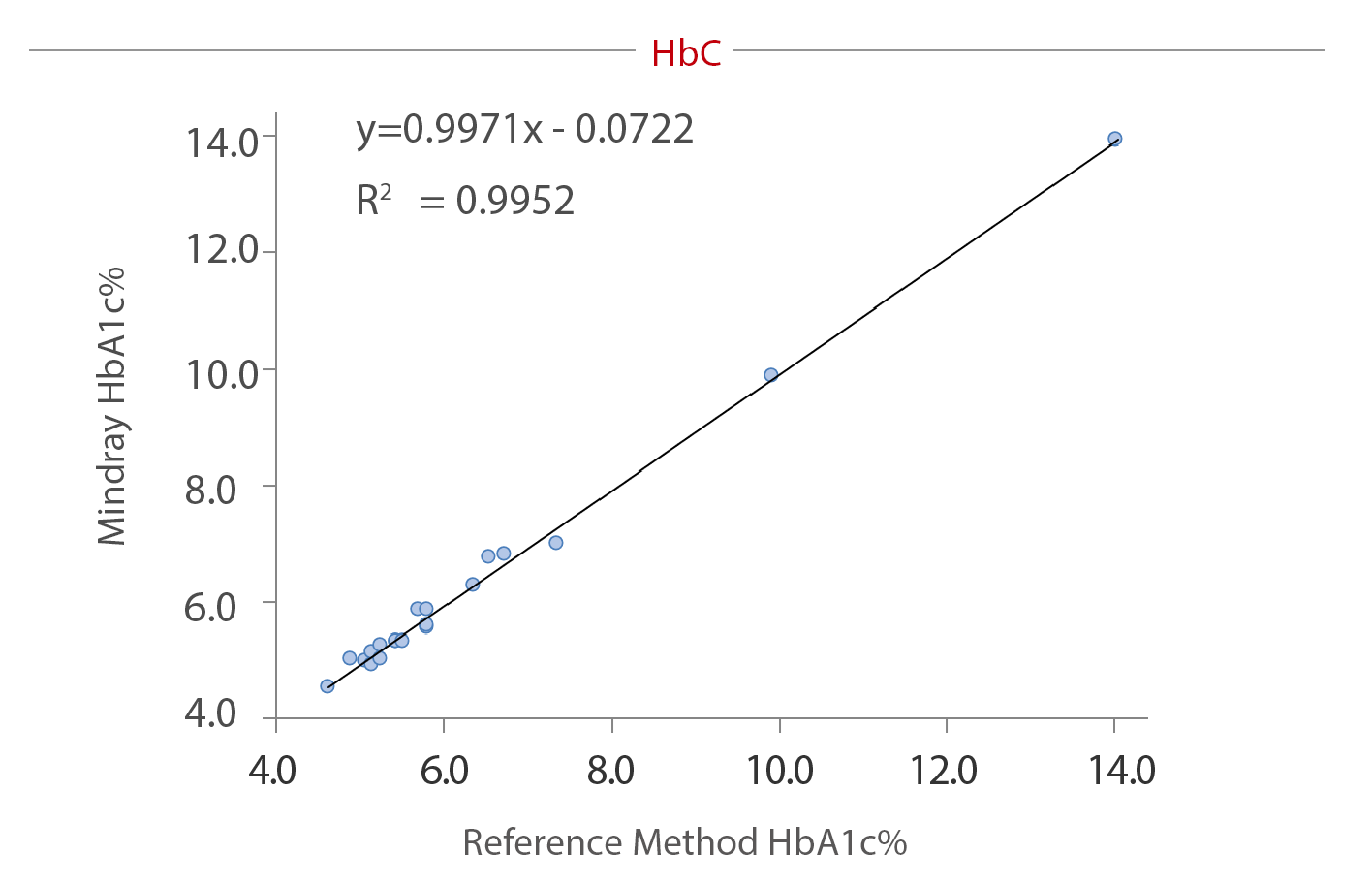 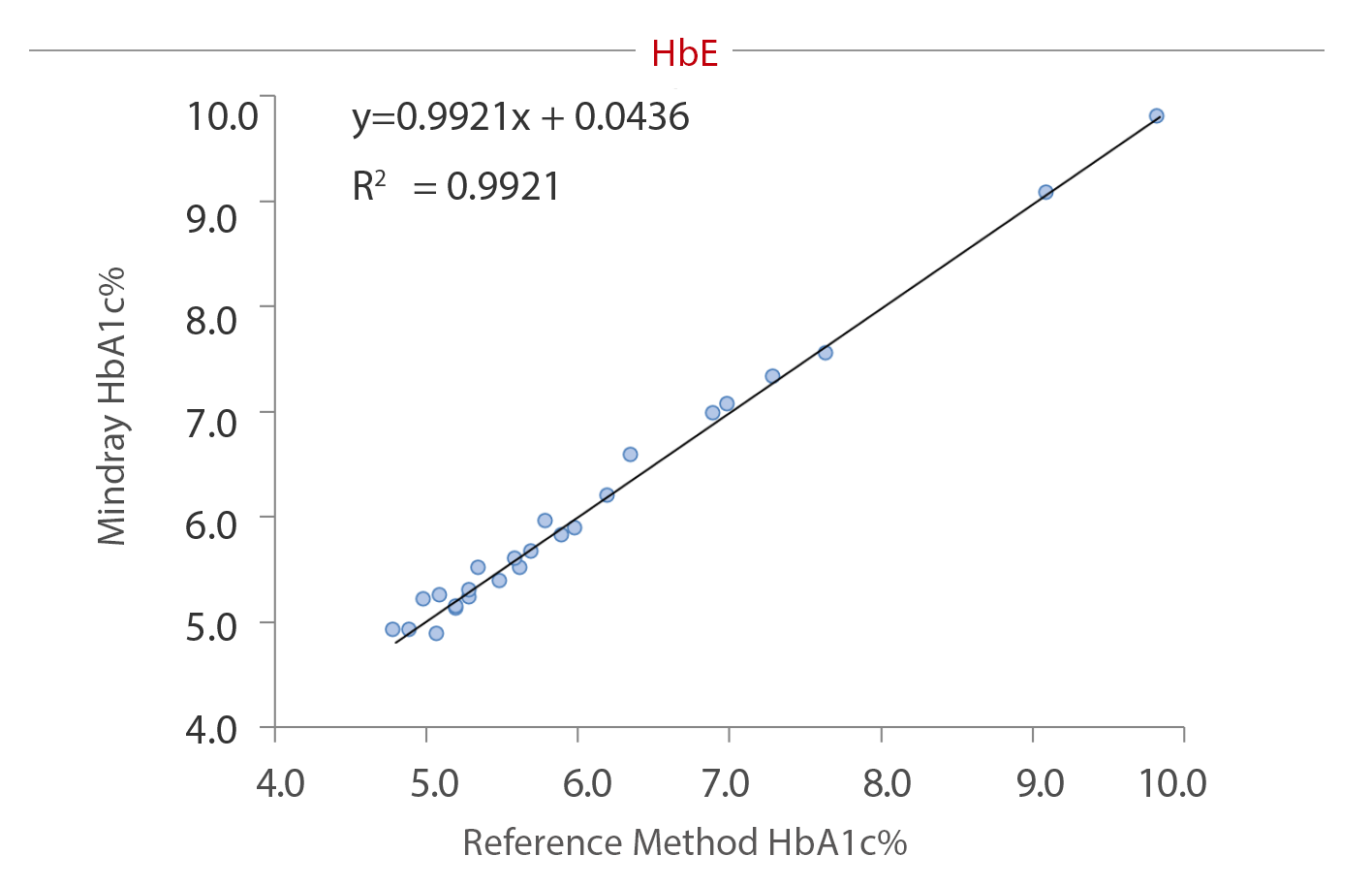 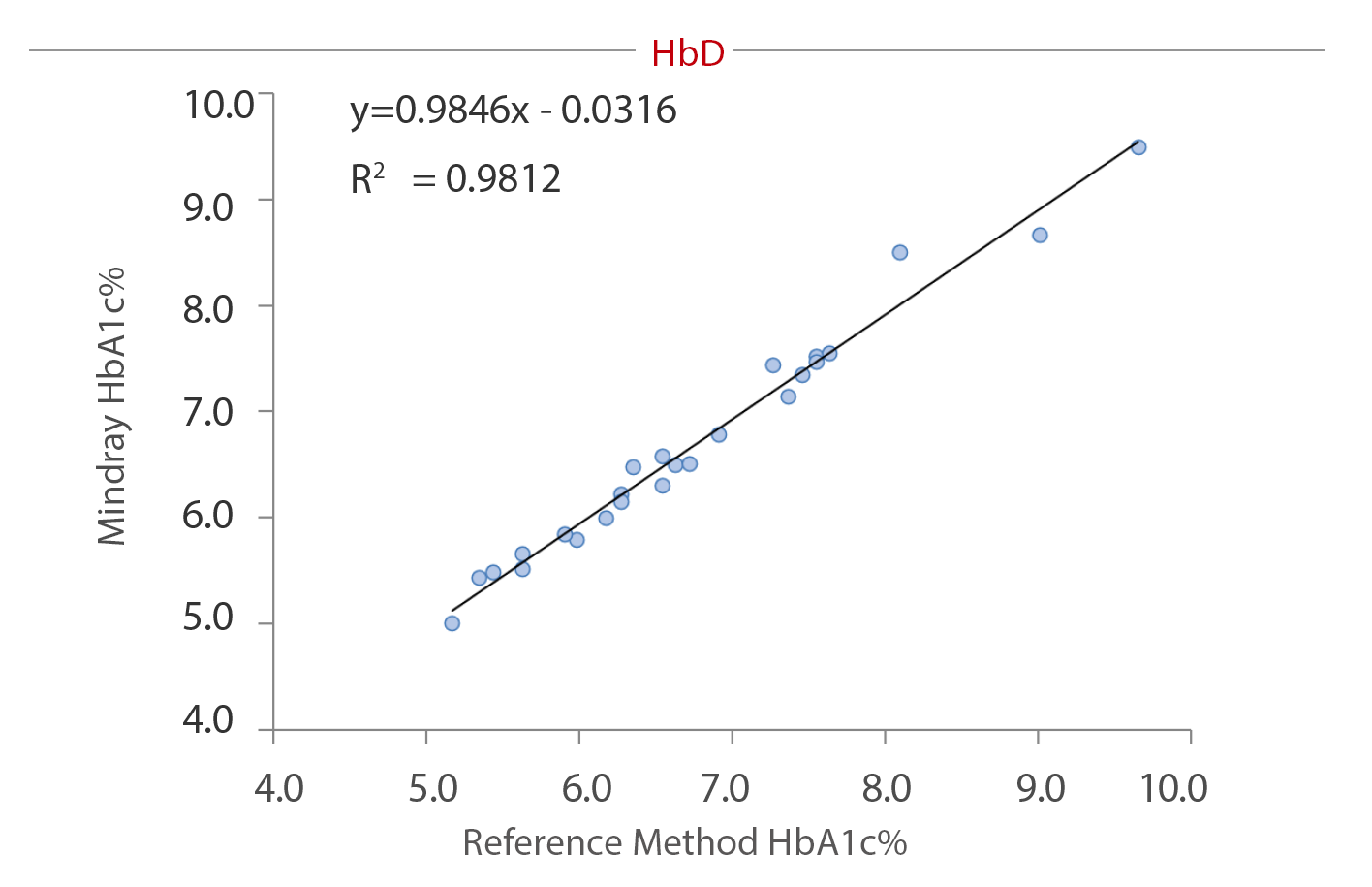 As a core marker recommended by multiple guidelines, HbA1c tests are highly significant in the screening, diagnosis, and monitoring of diabetes. Hb variants, especially the four most common variants worldwide (HbS, HbC, HbE, and HbD), can interfere the HbA1c testing result. The enzymatic method of the Mindray BS series chemistry system can effectively avoid interference from these variants.